Click image to purchase it on my other site nolaPIC.com

I have been trying to get this mystical shot for quite some time, I don’t just drop by and snap…I have a shot in my mind’s eye and try to conquer it. I have been waking up at 5 am and drove to the spot 4 times, but as always, you cannot plan what nature will do…Besides, humans are always in the way to screw things up too. I met the infamous Murphy there a couple of times. That son of a gun is no good and always in the way! I still ended up getting exactly what I wanted I can now finally say it LOUD & CLEAR:).

I was so happy when I finally got these two shots of this beautiful, yet scary alley of oak trees !

Click image to purchase it on my other site nolaPIC.com

I  don’t ever get tired of shooting the French Quarter in New Orleans, maybe because it’s so European and I feel at home, maybe just because it’s so unique! In the middle of  it all, first  to catch the sunrise and the fog poured in by the River is the St. Louis Cathedral. I particularly love these new photos I took since the fog is patchy  and not  “layered” evenly everywhere. The St. Louis Cathedral is lit by the sun, everything else is  in the fog, yet Decatur Street is still in the shade, and the sky is blue with clouds in it too! There is a “whole lot of light going on”, in other words…A gumbo of light :). Please do not forget to scroll down on this post, there are also a couple of other shots that I LOVE, one of Decatur St. at sunrise and one of the New Orleans Skyline , yep, French Quarter again…

To order fine art prints of the images below please click each one and you will be taken to my other Fine Art Photography site www.nolaPIC.com This blog dos not allow you to order any prints. For licensing feel free to contact me at Canon[at]pompo.com

This image of St Louis Cathedral makes me VERY happy since I waited for quite a long time yesterday to capture this photo. I have seen many shots of St Lous Cathedral, but the light, weather and angle in this photo, makes it very unique,  moody and romantic. It was very well worth it to deal with rain and super high humidity yay! It is available as a 10″x 10″ or 20″x 20″ fine art print or as a 20″x20″ giclees (canvas gallery wrap).

If you have read the famous book a “A Confederacy of Dunces” you should already know about these Lucky Dogs carts that are all over the French Quarter selling “gourmet hot dogs”. I tried to eat one once, but since I wasn’t drunk ( I don’t ever drink) it tasted pretty nasty to me. Maybe I forgot the relish , who knows, maybe it is true that people just eat them to soak up some the handgranades  they have had :). Anyway, getting back to business, this image is available as a fine art print here.

I have been so busy lately  that I haven’t been able to update this blog of mine as I should have… Among the updates that I  like to share :

Finally here are just a few shots that I just did which I really like that needs your attention! Please do keep on checking my site www.nolaPIC.com since that is the place to find the newer images and that’s where you can order prints and giclees from. As I said before I don’t have too  much time available to update this blog with the most recent New Orleans Photography as I would like to, and to tell you the truth, I’d rather be shooting ! 🙂

PS. Do not forget to scroll all the way down on the bottom of this post or you might miss that killer photo  of Pirate’s Alley wrapped in that French Quarter fog and Forever New Orleans right below!

Dr. LeMonnier’s home, on Royal St. in the French Quarter in New Orleans, referred to as “New Orleans’ first skyscraper” which towers three stories high. In the foreground are the elaborate cast-iron gallery railings of LaBranche House. It is one of the most photographed residences in New Orleans. To see  more New Orleans photography and purchase high quality prints please visit www.nolaPIC.com

The more pictures of streetcars I take, the more challenging it gets to come up with something unique and killer, however I don’t think I will ever grow tired of shooting them, in particular the line on Canal Street whose vehicles are red, and runs through all kind of  interesting backgrounds, traffic lights and bright traffi is my favorite. Chances are  that if and when I will somehow get a little bored with the current Canal St. line or the one on St. Charles Avenue (green ones), the new streetcars lines will be up and running on Rampart Street as it was recently announced!  Will they be a bright orange, turquoise maybe? Will the new streetcars be completely brand new with air conditioning and HD monitors in them? Plain air conditionion will be just fine …?

I finally had the time to post on this blog some of my newest images taken in 2011 in New Orleans (mostly in the French Quarter) and they are all available  on my gallery site www.nolaPIC.com . Sadly winter is almost over and the moody and gloomy ligh,t the rain and the deserted streets that I love are becoming a lot more alive and colorful. Please Bob Breck let me have another major cold front (or two!) I have another post  lined up with new pictures after this with some really killer streetcars shots taken on Cana Street and after that I’m afraid it will be time for Mardi Gras pictures…I’ll do my best to capture the celebrations I promise!All fine art prints are also available framed and with non glare glass with or without a mat. To see some more of my photography and purchase high quality prints please visit www.nolaPIC.com

These pictures below of the Preservation Hall are so far my favorites, best I have ever taken, the light was just perfect and  it was rainy and the framing was just right!  Yay! 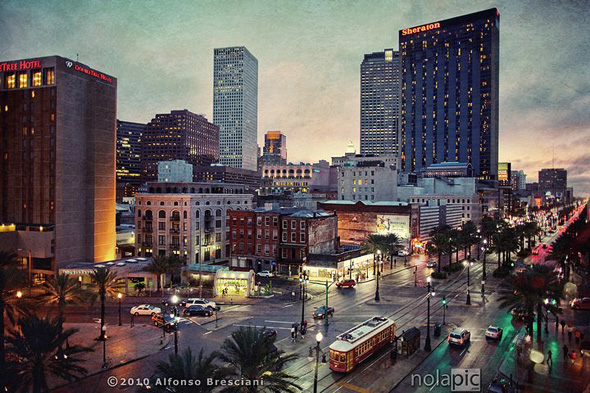 I have been drooling for a quite awhile now for these types of images and have been wanting to take them facing downward to Canal St. in New Orleans at twilight. Canal Street is very unique, so long and wide, but it is also very hard to shoot unless your are up high, and I mean way up there. These shots here were taken from the top of the World Trade Center building at the foot of Canal Street where the view is just incredible and beyond description; you  will be surprised also how strong the northerly winds blows when it gets funneled between the rows of buildings on Canal St.!  The images are available in square or rectangular format. Please click each of them to the to my other site where you can view them larger and/or purchase them.

Oh wow it was so worth it, yet again I got some killer shots in the French Quarter  during this last winter storm brushing up southeast Louisiana! Although it didn’t bring any of the white powdery stuff that we get to see down here so rarely, it brought once again the magic lights and moods of desolated streets and alleys… all of these photos below are available as fine art prints at www.nolaPIC.com Click any image below to get to the fine art print, where you can view them larger and/or purchase them. 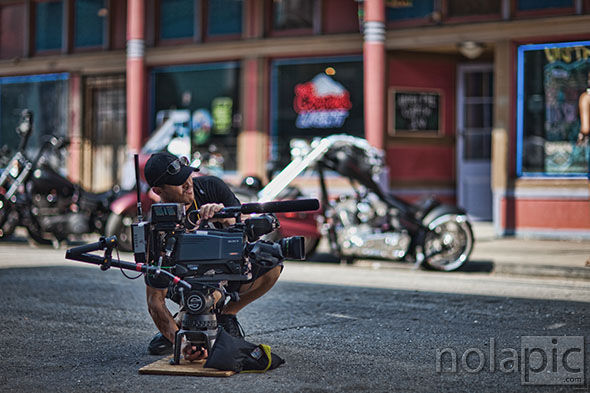